How can we help you today?

Many cameras embed lens corrections into raw the raw files that they produce. Generally, that's a good thing - straight lines stay straight, etc. For an example of lens corrections in practice, take a look at this post about the Leica SL.

But, as the saying goes, "there is no free lunch". Lens corrections also have some downsides:

So sometimes, it's useful to be able to get an uncorrected image. Now there are some raw developer apps that allow you get to uncorrected images (AccuRaw EXR is one of them), but most mainstream apps such as Lightroom and Photoshop don't allow correction to be disabled.

Fortunately though, there is a "simple trick" that will allow you to disable lens corrections for nearly any camera that produces raw images. What you need to do is a simple two step process:

The resulting DNG will not have any lens correction, and you can load it into Lightroom, Photoshop, or any other app that supports DNGs.

Why does this work? This works because whenever DNG Converter converts an image that needs lens correction, it embeds the required correction as an "opcode" into the DNG image. Lens correction opcodes as usually things like "WarpRectilinear". DNG Cleaner knows where to find these opcodes, and simply removes them, as long as you have the "Remove opcodes" checkbox selected. 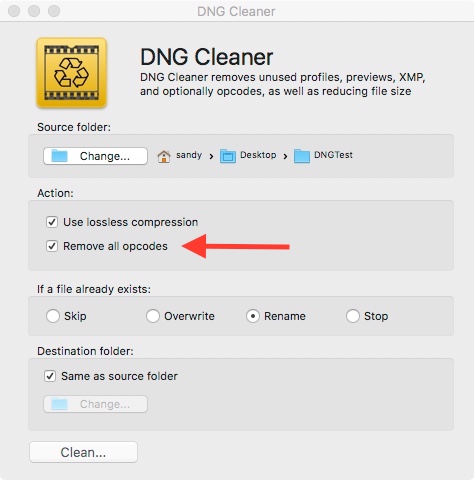 Note that in order for this to work, you need DNG converter to be using it's default settings. Specifically, Compatibility should be set to the most recent version of Camera Raw. You should definitely not be using Custom Settings with the "Linear" checkbox selected. "Linear", otherwise known as LinearRaw, bakes any corrections into the actual data in the DNG, making it impossible to remove.

Did you find it helpful? Yes No

Send feedback
Sorry we couldn't be helpful. Help us improve this article with your feedback.