How can we help you today?

In order for you to view raw images, PhotoRaw must first import them. When PhotoRaw imports an image, three things happen:

Note: If an image import fails, you will see a yellow warning icon next to the image. Touch the Information button (i) to get more information on the reason for the failure.

How to import images

Getting images into PhotoRaw is really a two step process - first you need to get image onto the iPhone or iPad, and then you need to import the image into PhotoRaw. There are three basic ways to do this:

Note: Import operations can, depending on file size, take up to several minutes. While the import operation is ongoing, the activity indicator for the file will be displayed.

Apple's Camera Connection Kit allows you to import images either from an SD card, or from a camera connected via USB.

Note: You will not be able to import images from an SD card via the Apple Camera Connection kit unless the camera in question is supported by Apple. You will still be able to import images into PhotoRaw via any of the alternate means - email, iTunes file sharing, via file sharing programs such as DropBox, etc. For a current list of cameras that are supported by the Apple Camera Connection Kit, see the supported cameras page on the Apple site.

In order to use PhotoRaw with the Camera Connection Kit, follow these steps:

Working with File Sharing Apps such as DropBox

File sharing apps such as DropBox are a convenient way to transfer images to PhotoRaw. This example applies to DropBox, but most other file sharing apps behave in a very similar fashion. 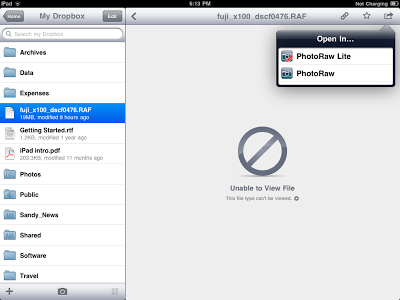 Firstly, install the file sharing app on both your PC, Mac or laptop, and on your iPad or iPhone.

Then add the image file you want to transfer to the shared folder on your PC, Mac or laptop. Open the file sharing app on your device, and wait for the file to download. Then simply touch the export button, as shown in the screenshot (don't be concerned about any "Unable to view file" messages - that's what PhotoRaw is there for). The file sharing app will offer you the option of opening the image file in PhotoRaw. Select that option, and PhotoRaw will begin the import process.

Did you find it helpful? Yes No

Send feedback
Sorry we couldn't be helpful. Help us improve this article with your feedback.